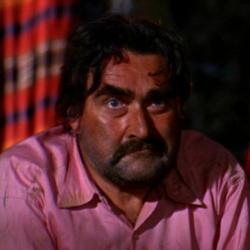 Vavra was the head of a tribe of Gypsies that lived in a camp in the outskirts of Istanbul, Turkey. He spied on the Bulgars, reporting information back to Kerim Bey. Bond and Kerim were invited to dinner at the camp, where two girls were to fight to death over the love of a man. The fight was interrupted, and Bond managed to save Vavra's life, gaining his upmost respect and gratitude.

In From Russia with Love, released in 1963, Vavra was the head of a tribe that lived in a settlement on the outskirts of Istanbul, Turkey. He was visited by James Bond and Kerim Bey, the MI6 representative in Turkey. Vavra was an old friend of Kerim's, and he occasionally gave him information about the Russians and the Bulgars. On the night in question, Kerim and Bond came for dinner and were invited to a fight between two gypsies who loved the same man.

In the middle of the fight, the Bulgars attacked the camp, killing men and setting fire to the caravans and homes. Vavra was brave, and one of the first men to launch a counter attack. In the midst of the battle, Vavra's life was saved by Bond, and the Bulgars were soon fought off. In return for his life, Vavra made Bond one of his sons, and gave him the two gypsy women, a very honourable thing for an outsider.

Vavra was a very iconic character, and he stood out from the crowd impeccably with his bright pink shirt. He knew very little English, and constantly replied to Bond saying "Thank you!, Thank you!". He was cheerful, brave and very generous, and it was a superb performance from Francis De Wolff.

Vavra was the head of a tribe of Gypsies that lived, and ran a cafe, in a poor area in the outskirts of Istanbul, Turkey. He spied on the Bulgars and reported any information back to Kerim Bey, the head of Station T, the MI6 representative in Turkey. Vavra was Kerim's best intelligence source, and was first introduced when Kerim visited his camp, requiring information about a limpet mine that had been planted outside his office.

When Bond and Kerim arrived at the camp, they were invited for dinner, and were served a garlic dish with lots of raki and water. Vavra remarked that everyone in the camp ate with their right hand and drank with their left, so Kerim and Bond followed suit. Two girls in the tribe had fallen in love with one of Vavra's sons, and each one swore to kill the other to get to him. They had brought hatred into the tribe, so Vavra decided that they would settle the feud the Gypsy way, and fight to the death. This would purge the unrest from the camp, and restore peace. If either girl lived, she would be banished for life. There was room for hatred against outsiders only, and Vavra would kill anyone who interrupted the fight.

The fight began, and the two girls tore at each other's throats and scratched each other's faces. Just as it was nearing the end, a group of Bulgars, lead by Krilencu, stormed the camp, shooting at the men, and setting fire to the caravans. They were eventually fended off, Vavra having killed 10 of the Bulgars, and wishing he had killed more.

Part way through the fight, Bond had saved Vavra's life. Vavra had expressed his eternal gratitude, saying that he hated all gajos (foreigners) except for Bond, who he was proud to call his friend. He said that if Bond was ever out of work, he would hire him to tame his women and kill his enemies, a great compliment for a gajo. As a token of his appreciation, Vavra called the fight a draw and said that the two girls, Zora and Vida, would belong to Bond until their breasts fell.

It was discovered from an injured Bulgar that the goal of the attack had been to kill Kerim, but Vavra refused to blame Kerim for the incident, instead giving him information on the men behind the attack. Kerim and Bond left the camp the next day, leaving behind a peacefully restored tribe on their small camp.