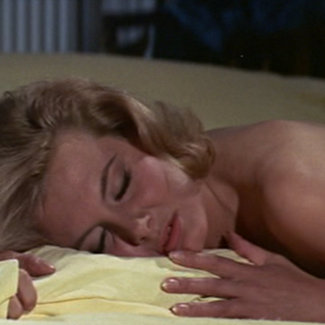 Patricia Fearing was a nurse at the Shrublands health clinic in the South of England. She appeared in both the novel and the film adaption of Thunderball, and treated both Bond and SPECTRE agent Count Lippe. 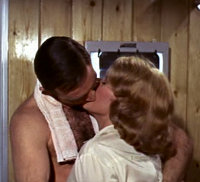 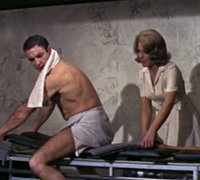 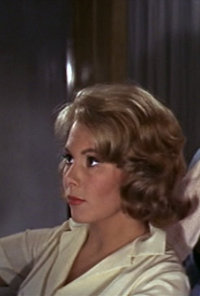 Patricia Fearing was a nurse at the Shrublands health clinic in the South of England. She was assigned to treat both Bond and Count Lippe as part of a health rejuvenation package. Bond had been sent by M to detoxify from martinis and caviar.

Patricia massages Bond, takes his xray, and nurses him in general. The whole time Bond is making passes at her, and she initially resists and gets angry at him. While doing a physical, Bond kisses her, so she puts him on a rigorous stretching machine to "keep him quiet."

SPECTRE agent Count Lippe turns the traction machine onto full blast, knocking Bond unconscious, and almost killing him. Patricia manages to turn the machine off in time, but feels guilty for leaving him unattended. She begins to warm to Bond, and suggests he spend some time in the steam room to recover.

They make love in the steam room, and then Bond massages her with a mink glove. Patricia complains about the noise from a plane outside, and Bond goes to shut the window, seeing something suspicious outside. He goes for a stroll and ends up pulling the fire alarm to get himself out of danger. Patricia comes out:

The next morning Patricia sees Bond off, who says there has been a flap at the office. He is obviously using a cover, as Patricia isn't aware that he's an MI6 agent, but the sentiment is true, there is a flap at MI6.

Bond drives off to attend an urgent meeting with M, and says he'll see Patricia another time, another place. However, she is never seen again in the series, but at least remained alive, which not many Bond girls can say.