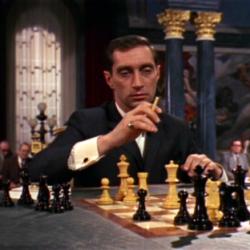 Kronsteen, played by Vladek Sheybal, was the head of planning for SPECTRE in From Russia with Love (1963). He devised a plan to lure James Bond into Turkey and then kill him, humiliating the British government and getting revenge for the death of Dr. No. When the plan failed, he was killed with a poison tipped knife.

Kronsteen was the head of planning for SPECTRE, and was played by Vladek Sheybal in From Russia with Love (1963). He devised a plan to lure James Bond into Turkey with a Lektor decoding machine. Once there, Bond would be killed, and the Lektor would be taken, and sold back to the Russians. The incident would humiliate both James Bond and MI6 and would allow SPECTRE to get revenge for the death of their operative Dr. No.

Vladek's soft voice and intellectual manner was perfect for the role, and was played very close to the character in the novel. Kronsteen is first introduced in the middle of a chess match, where he makes a daring move and wins the game, just before his meeting with SPECTRE. Although his plan was foolproof, the mission was a failure. Bond killed the SPECTRE agent and retained possession of the Lektor.

In a meeting with Blofeld (the head of SPECTRE), Kronsteen blamed the failure on poor execution, at the fault of Rosa Klebb. Blofeld seemingly agreed and buzzed for his henchman Morenzy, who walked up behind Klebb, flipping a poisoned knife out of his shoe. In a quick turn of events, Morenzy spun around and kicked Kronsteen with the knife, sending him to the floor, and to his ultimate death.

Kronsteen first appeared in From Russia with Love (published in 1957), as a Colonel and the head of the Planning Department at SMERSH. He had been the chess champion at Moscow for 2 years, and when he was first introduced, he was playing the final round of what could be his 3rd win. He was near the end of the game against the Georgian champion Makharov, when he received a letter saying "You are required this instance".

The novel exquisitely portrayed the strictness and the fear generated by SMERSH, a theme that wasn't particularly present in the movie, especially during the chess scene. When Kronsteen read the note from SMERSH, he was only moments away from winning the championship, but he knew that he could be killed by SMERSH if he didn't obey the note immediately. With sweat coming down his brow, he disobeyed the order and took three minutes to win the tournament, later telling SMERSH that the public would have been suspicious of him if he had left with only a few moves away from a win.

It really goes to show the fear that even the topmost staff at SMERSH had of their leader, General G. Although Kronsteen was smart enough to escape the possibility of dangerous situations, he was not without fear. Kronsteen thought of all people as chess pieces, and he was constantly planning ways to manipulate them and use them to his advantage. Good and bad meant nothing to him, and human life, even that of his own children, was a mere tool, with no significance.

The letter Kronsteen received summoned him to a meeting with the head of SMERSH, General G and the Head of Operations, Rosa Klebb. The General wanted Kronsteen to devise a plan to create a scandal and kill a British agent, humiliating both him and the whole of MI6. Kronsteen ignored Klebb's condescending tone while she outlined her choice of men to bring in on the mission. Although he was skeptical of her choices, her opinions satisfied him.

Kronsteen decided that he would lure an agent into Turkey with a beautiful Russian girl, by having her send a message to MI6, asking to be brought back to England in exchange for a Spektor decoding machine. He would then kill the agent and the girl, and steal the decoding machine back, making a fool out of MI6 and accomplishing his objective.

He decided that the agent should be James Bond, because his high reputation would humiliate the British even more. He had a watch put on Bond and realized that he was off a mission and would be perfect for the trap. He choose Istanbul, Turkey as the meeting point because of its weak MI6 base and its strong MGB base. Unlike in the film, Kronsteen actually lives, with others being punished for poor execution of his otherwise excellent plan.