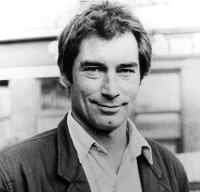 Tim is a fine actor, and brought a bit of the Bond from the novels into his character. He was often seen on set reading through the novels, and he referenced them a lot in discussions with the producers and director.

Besides James Bond, Tim is quite well known for his roles in Shakespearean films, and also has a large presence in stage work. He's still working today, having most recently starred in Hot Fuzz, playing a comical store manager.