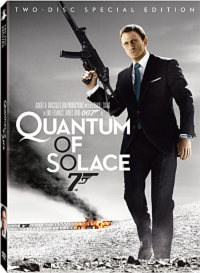 Quantum of Solace will be out on DVD and Blu-Ray next Tuesday, March 24th. We've received a Screening Copy of the Two-Disc Special Edition DVD, which we'll be reviewing all aspects of, so you can decide for yourselves whether it's worth pre-ordering or not.

For those that haven't seen the film, here is the official plot summary from an MGM press release:

Quantum of Solace continues the high octane adventures of James Bond in Casino Royale. Betrayed by Vesper, the woman he loved, 007 fights the urge to make his latest mission personal.

Pursuing his determination to uncover the truth, Bond and M interrogate Mr. White, who reveals the organization which blackmailed Vesper is far more complex and dangerous than anyone had imagined. Forensic intelligence links an MI6 traitor to a bank account in Haiti where a case of mistaken identity introduces Bond to the beautiful but feisty Camille, a woman who has her own vendetta.

Camille leads Bond straight to Dominic Greene, a ruthless business man and major force within the mysterious organization. On a mission that leads him to Austria, Italy and South America, Bond discovers that Greene, conspiring to take total control of one of the world's most important natural resources, is forging a deal with the exiled General Medrano. Using his associates in the organization, and manipulating his powerful contacts within the CIA and the British government, Greene promises to overthrow the existing regime in a Latin American country giving the General control of the country in exchange for a seemingly barren piece of land.

In a minefield of treachery, murder and deceit, Bond allies with old friends in a battle to uncover the truth. As he gets closer to finding the man responsible for the betrayal of Vesper, 007 must keep one step ahead of the CIA, the terrorists and even M, to unravel Greene's sinister plan and stop his organization.

The Menus are a little plainer than usual, without the movie clips that would normally run in the background. Instead, there's a map of the world, which zooms into all the locations visited throughout the film.

The scene selection looks quite sharp, but is without the witty titles used in a lot of prior Bond DVDs. The final item on the first disc is a special features menu with the music video for Another Way to Die, and two trailers.

The Audio options include English, Spanish and French 5.1 Dolby Digital, and English 5.1 DTS. For the non tech-savy, this basically means that you get very high quality surround sound audio.

The film sounds brilliant, and there are certainly no defects or grainy sections. Subtitles are available in English and Spanish, but as with the Casino Royale release, there are no audio commentaries, on either disc.

Overall the video quality is excellent. It won't match the resolution of the Blu-Ray version, but it still looks great even on a large TV. However, saying that, there are a few sections that are visibly grainy, during the brief horse race sequence. But it lasts at most 15 seconds, and has little impact on the quality as a whole.

The first feature on the disc, Bond On Location, is a 24 minute documentary style video. It features Daniel Craig, producers Michael Wilson and Barbara Broccoli and director Marc Forster, as well as several other cast and crew members, discussing the importance of exotic locations.

But not only the locations. They also talk about how it's not just as simple as filming in a nice place. It's just as crucial to have authentic extras and to capture the culture of the city they're shooting in.

It's actually really interesting, as it gives quite a good insight into some of the challenges the filmmakers have to overcome in certain locations. A fantastic effort, well worth watching.

Next up are four really bad little 3 minute videos that somehow manage to repeat footage from Bond on Location. Very poor effort, and barely worth putting on the DVD. It really seems like they ran out of content, and just reedited previous footage to beef up the list of features.

After a stream of terrible videos comes a really interesting 3 minute segment where composer David Arnold gives an insight into creating music for a Bond film. Short and sweet.

The last item on the disc is a collection of 34 crew videos. I believe they are taken from the official blog, where crew members from all departments introduced themselves and gave a short description of their purpose in the film. Some are quite interesting.

There are actually two versions of the Quantum of Solace DVD coming out. One has the two discs described above, and the other just has the first disc, and is around $5 cheaper.

It's definitely worth buying for the film alone, with the video and audio being of fantastic quality. The special features are a bit of a let down though, no audio commentaries, and only really the one feature worth watching.

If the two-disc version is more expensive in your locale, I'd recommend going for the single disc, you're really not missing much. On the other hand, if you're a die hard fan, the Bond on Location feature may be worth it for you.

Don't forget about the Blu-Ray release though, which is the same as the Two-disc DVD, but has the film and some features in spectacular hi-definition.