1964 Aston Martin up for Auction 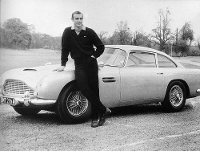 A 1964 Aston Martin DB5 is going up for auction online on March 12, and will run for 8 days. The car is identical to the model James Bond originally drove in Goldfinger, as well as the later appearances in Thunderball, Goldeneye, Tomorrow Never Dies and Casino Royale.

Jason Pinder of Eddisons said: "This is a stunning example of a truly great motor car which has been painstakingly returned to its former glory. Apart from its association with James Bond, it is a lasting example of timeless British car design. I am sure whoever the successful bidder is will be the envy of many a motorist."

Update (Feb 28th): It turns out that the car isn't as identical as originally claimed. While it is a similar model, the interior is not black for a start, therefore not identical to the model used in the Bond films. Still a rare item, and worth the money though.