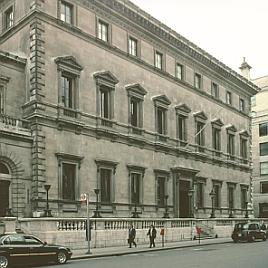 The image on the left is of The Reform Club, a club that is somewhat similar to the fictional club Blades, and was used for part of the shooting of Gustav Graves' fencing club Blades in Die Another Day.

Blades is the most exquisite private card club in London. It is a fictional club from Ian Fleming's novel Moonraker. The club has a huge gaming room, and a dining area that serves some of England's best food.

In 1774, a club named Scavoir Vivre was opened on Park Street, a quiet backwater off St. James Street in London, England. Within a year, the club went out of business and was closed down. In 1776, a new club was opened in the same location and was said to "surpass all its predecessors." This was the beginning of the club later named Blades. The name Blades first occurred in a letter sent by a historian named Gibbon who referred to the club by the first name of its German founder Longchamp. The club became a huge success and was known as the most exclusive club in London, if not all of England.

Occupying the majority of the ground floor at Blades is the magnificent white and gold regency dining room. In the center of the non-smoking room, there is a large table under an exquisite crystal chandelier. There are several rows of smaller tables each with a candelabra with three candles under red silk shades, and a white damask table cloth. They are surrounded by comfortable armed chairs and contain George IV silverware.

At the far end of the dining room a portrait of Mrs. Fitzherbert, wife of King George IV, is hung. Across from that hangs Fragonard's Jeu de Cartes, a broad piece filling half the wall above an Adam fireplace. Around the room there are several rare engravings of the Hell-Fire Club, showing figures making gestures related to magic. The elaborate coving has painted decorations and carved urns.

Broad menu cards with Blades in gold lettering show the excellent selection of dishes served. Some of their finest food, eaten by Bond and M, includes:

Along with the food comes a vast selection of fine drinks with an accompanying wine waiter. Some of the drinks ordered by Bond and M include:

A wide staircase with a mahogany handrail leads up to the second floor of Blades where the famous gambling room is situated. It is a long room with a barreled ceiling and lavish carpeting. Three bay windows at the front of the building are dressed with opulent red curtains. There are many gaming tables illuminated by the soft glow of lights with dark red shades. Blades offers many types of gambling including:

At the end of the gambling room, the Lawrence of Beau Brammel hangs over a large fireplace. There are several gas-jets protruding from the walls, to light cigarettes or cigars. They were originally placed there before the invention of matches.

Memberships at Blades are limited to 200 at any given time. To qualify as a member you must:

There are 200 members at Blades, as well as staff and guests. Many MPs have membership. Known staff and members of the club include: