There are many things which can be claimed to typify the James Bond character, from the clothes he wears and the cars he drives, to the cigarettes he smokes. However, there is something which, arguably, defines bond more than anything else; his choice of firearm.

Fans of James Bond will remember how, in the novel Dr No, Bond was forced by 'M' to relinquish his weapon of choice, the 0.25 calibre Beretta, to be replaced with the now iconic Walther PPK. This change was instigated on the grounds that, on a previous mission, the Beretta had failed Bond, almost bringing about his death. In reality, Ian Fleming had acted on the advice of a man called Geoffrey Boothroyd. As well as being a James Bond fan, Boothroyd was also an expert on firearms. In his opinion, the 0.25 calibre Beretta was the type of gun that a lady would carry in her purse. A man like Bond needed something more fitting.

Boothroyd tried to persuade Fleming to have Bond use a Smith & Wesson air-weight revolver, chambered for the 0.38 Special cartridge. There is no doubt that Smith & Wesson produce excellent firearms and that the 0.38 Special can be a proper man stopper in the right hands. However, Fleming decided that 007 was not a 'revolver man', feeling that the sleek lines of a semi automatic weapon would suit Bond better. Boothroyd suggested the Walther PPK chambered for the 7.65 calibre and the rest, as they say, is history. The Walther PPK became Bond's signature weapon and has remained so, even with the advent of a new Bond played by Daniel Craig.

According to the Dr No novel, three other guns which were considered for Bond, as well as the Walther PPK. These were the Japanese Nambu M14, the Russian Tokarev TT-33 and German made Sauer M38. The Nambu and the Tokarev seem to be odd choices for a concealed weapon and one wonders how they ever came into contention. The answer may lie in correspondence which took place between Fleming and Boothroyd in May 1956, which was reproduced in Sports Illustrated magazine on 19th March 1962.

In this correspondence, Boothroyd related how, in 1948, the U.S. Army Ordnance Corps tested some of the various pistols used in WW2. Amongst these were the Nambu, Tokarev and Sauer M38. Fleming, who was never an expert on firearms, seems to have used this information as part of his research for Dr No. The choice of the Nambu or Tokarev as a concealed weapon is impractical and we shall now examine why. 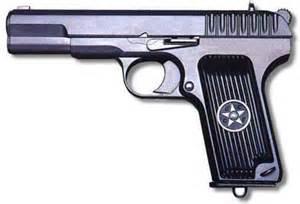 The Tokarev pistol as referred to in Dr No, appears to have been the TT-33. It was produced from 1933 and was adopted by the Red Army as a replacement for the venerable Nagant revolvers. At almost eight inches in length and weighing 0.830kg, the TT-33 was a full size service weapon, not the easily concealed pocket pistol required by Bond. Additionally, the Tokarev's powerful 7.62mm cartridge generated a muzzle velocity of 420m per second and this, coupled with the pistol's comparatively light weight, could make it make it difficult to handle. The burning question remains, why would 007, that epitome of Britishness, consider using a weapon manufactured by the Russkies? 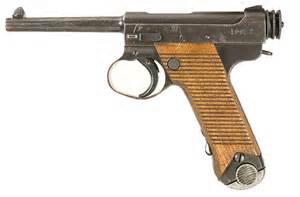 In some ways, the Nambu seems an even less appropriate choice of weapon for Bond than the Tokarev. Never the most reliable of guns, it measured over 9 inches in length and used an unusual 8mm cartridge, which would surely have been difficult to come by in post-war Europe. Apart from anything else, both the Tokarev the Nambu was too ugly a weapon for a style icon like Bond. 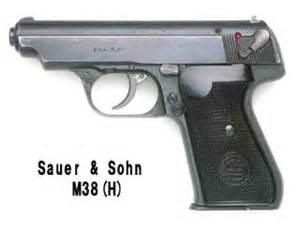 The M38 pistol was a much more suitable weapon for 007 and was deservedly a suitable contender to the Walther PPK. The M38 was yet another well made German pocket pistol and was produced by the company of Sauer & Sohn in 1938. It was an extremely well made and advanced weapon, with some of its features only having been duplicated in recent years.

Ian V Hogg, the prolific author on firearms, has ventured that, had it not been for the intervention of World War 2, the M38 could have cornered the world market for pocket pistols. The M38, unlike most pocket pistols weighed in at 25.3oz when unloaded. Compare this, for instance to the 20.50oz empty weight of the Walther PPK. This extra weight had the effect of improving the shooting qualities and accuracy of the pistol. In addition, the pistol had a magazine capacity of eight rounds, which was higher than most other pocket pistol of the same calibre at the time. 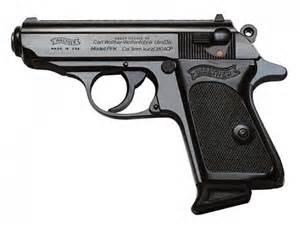 The Walther was indeed a good choice of weapon for 007. The PPK's predecessor, the Walther PP, was introduced in 1929. The pistol proved to be popular from the outset and became the weapon of choice for the German police force. It was closely followed by the PPK, which differed from the PP in its smaller length and became popular with detectives and undercover police officers. It is believed that the letter 'K' in the pistol's designation stands for Kurz, the German word for short. However, it is just as likely that it stands for Kriminalle, the German detective branch. After the outbreak of World War 2, almost the entire output of this pistol was issued to the Luftwaffe, police and German staff officers.

It was chambered in the calibres of 7.65 mm, 9mm short (.380 auto), 6.35 mm and 5.58 mm (0.22 long rifle). The most popular of the calibres was the 7.65 mm, the same calibre as in the pistol used by 007. It is one of the best small pistol designs ever produced and has spawned a host of imitators, including guns manufactured in Turkey, France, Hungary and Spain.

The PPK's deserved reputation for reliability took something of a knock in March 1974, when a lone man, armed with a pistol, attempted to kidnap Princess Anne. The man, Ian Ball, pulled his car in front of the Princess's limousine, forcing the driver to stop. The princess's bodyguard, Inspector James Beaton, was armed with a Walther PPK and attempted to fire at Ball. Beaton failed to fire a single shot, due to his pistol jamming. Ball shot three more people during the kidnap attempt, although none fatally. The malfunctioning of the Walther is more likely to have been caused by the incorrect operation of the weapon than any deficiencies in design. However, the incident caused the metropolitan police to favour revolvers for some years after. Another interesting snippet of information, is that the PPK, designated as the XL47E1, was issued to undercover members of the military during the conflict in Northern Ireland.

After all of these years, the Walther PPK is still going strong, thanks in no small part to the James Bond films. 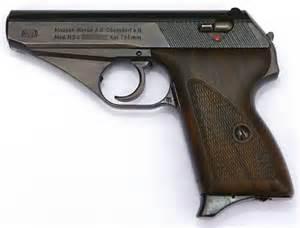 The Mauser Model Hsc should have been a serious rival to the Walther. For a start, the Mauser Hsc is a real looker. The broad, sloping trigger guard, gives it a really aesthetic look, as well as giving the pistol that quality referred to as 'pointability', a great aid to instinctive shooting. This pistol was intended as a rival to the Walther, so much so that the original design, the Hsa, was withdrawn as some of the components infringed Walther patents. It was replaced by the Hsb prototype which, after a few more adjustments, became the Hsc. Production began in 1939, with most of the output being inducted into military service. The most likely branches of the services to receive the pistol were the Kriegsmarine (Navy) and the Luftwaffe (Air force). 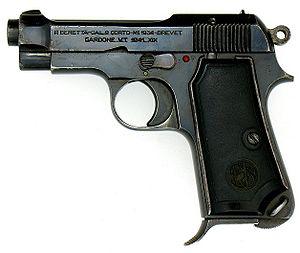 This Italian made pistol seemed to feature in almost every crime drama of the 1960s to the 1970s. From The Saint to The Avengers and from Department 'S' to The Professionals, when a gun was pointed at someone, as often as not, it was a Beretta Model 1934.

The Model 1934 was manufactured by the famous Beretta company and was the successor to the Model 1931. The history of Beretta firearms goes back to the 17th century, when the company manufactured gun barrels. They first ventured into pistol manufacture in 1915, when the company produced a semi-automatic pistol intended for the Italian Army. Although the pistol was never adopted officially as a service weapon, it was widely procured as a personal weapon by army officers.

In 1934 Beretta produced a semi-automatic pistol as competition to the Walther PP, which the Italian Army was considering buying. The Model 34, as it was called, was chambered for the 9mm short /0.380 calibre. Although this was not a particularly powerful round, it still packed more punch than the 7.65 calibre, which was widely used in other small frame automatics. The simplicity and robustness of the design, made the Model 1934 an immediate success and, as intended, was adopted by the Italian Army. Some gun experts have ventured that the pistol was manufactured to such high standard, that it could have a service life of up to 100 years, if maintained properly. In 1935, Beretta produced the M1935 which was chambered in 7.65 calibre. Outwardly, the pistol is virtually identical to the Model 1934.

On 30th January 1948, a young Hindu radical called Nathuram Godse, assassinated the venerated Indian National leader, Mahatma Gandhi. The weapon he used, was a Beretta Model 1934, chambered in 0.380 calibre, with the registration number 606824. 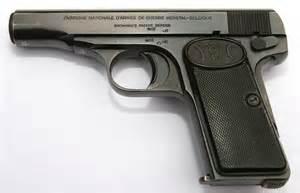 The Browning 1910 is one of the best semi-automatic pistols ever produced. It was a product of the fertile mind of John Moses Browning, who at first offered the design to the huge Colt firearms company. They turned it down, so Browning struck a deal with the Belgian FN company, which began producing the pistol from 1910. It was Colt's loss, as the pistol proved to be a great success and was continuously in production from 1910 to 1983.

During the First World War, British officers were required to provide their own pistols and the Browning was particularly popular. It provided sterling service, even amongst the mud and blood of the French battlefields.

An interesting footnote is the part that the Browning 1910 played in starting the First World War. The pistol, chambered for 0.38 calibre, was said to be used by Gavrilo Princip when he assassinated Archduke Ferdinand of Austria in Sarajevo on June 28th, 1914. This act was said to have ignited the Great War. Some aficionados have gone so far as providing the pistol's serial number of 19074. 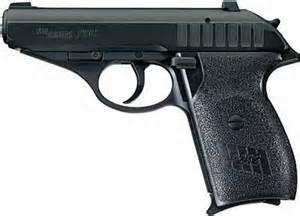 If the Bond books were just being written today, what would be 007's weapon of choice? A search on the Internet would throw up all kinds of suggestions, from a custom built weapon to one of the host of sub-compact 9mm semi-automatics that almost every gun manufacturer seems to be offering nowadays.

In the opinion of the author, there is one pistol which ticks all of the boxes for Bond. It is a proven design, recognised and respected by gun aficionados the world over. It is also chambered for one of the most popular calibres ever produced. It is the P232 manufactured by the SIG/SAUER company, an amalgam of the Swiss SIG concern and the venerable German concern, Sauer & Sohn. Advocates of 9mm parabellum ammunition may criticise the lack of stopping power of the 0.380 auto round and until recently, they might have had a point.

However, in 2008 the American ammunition manufacturer, Hornady, introduced their new critical defence round. This type of ammunition is specifically designed for concealed/carry weapons and offers superior penetration, even through heavy fabrics such as denim and leather. It also has the capacity to cause severe wound cavities on anyone getting in its way.

This ammunition has lifted the 0.380 auto pistol from average to a real man stopper. In terms of reliability, concealment and sheer class, this pistol is the one for a 007 of today.

Craig Robinson is the author of The Men Who Might Have Been Bond.